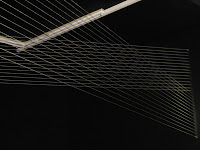 Entering into the darkness alone / A small light around a corner illuminates the surrounding architecture / There is warmth in the air / The hard surface of the floor silently turns into something much softer / No longer are my shoes able to make a sound / Across the space is a figure surrounded by an orb of luminous orange light / A conversation is being held in the distance / Its content, indecipherable / Sometimes it fades away entirely / At other points it comes close to intelligibility, but yet always remains unattainable / Someone was repeatedly asking me questions / A strong sense of disorientation prevails / The floor appears to shift / Other surfaces such as the walls and ceiling swap functions and properties / A single piece of burnt paper remains fixed directly ahead / My eyes were not working correctly, my movements slow / Turning to my right someone hands me a small kitten / Wrapped in a soft tortilla for protection (salad being used as a bed), the kitten needs to be transported / Its made clear this is not to be eaten / Its my responsibility alone. / The conversation became comprehensible at last / It was short / Still without an idea of who the person was at the other end of the telephone, the recipient was clear enough / She slammed the telephone down in front of me / Sobs, sniffs and high pitch whimpers punched their way through a chorus of uncontrollable weeps / My heart sank as my mind opened a thousand questions / A sense of expectation is felt on my behalf / What is it? / There is a book in my hand / It felt incredibly hot / We only have one copy / Nothing is to be answered or to be fixed / Someone accompanied me, a good friend / Looking down at my shoes they had totally vanished / Planets from the solar system had replaced each of my toes / This is completely inappropriate / My head began to thump / Something had begun to pester me / There was no activity just total silence / My eyes blinked / I was awake.

The image that was there had now been erased. Replaced by a white wall and a flat screen monitor showing the work of Thea Djordjadze and Rosemary Trockel. The work played continuously on a loop. I recognised certain sounds and words from the work. The wooden frames that the artists constructed outdoors crackled and hissed as they were ignited. High pitch whines emanated from the screens as Djordjadze and Trockel’s high frequency microphone captures every sound. Each work follows a similar acoustic pattern. Lasting around five minutes (ignition – collapse – extinguish), a chorus of sound builds slowly as it reaches an intense climax. Each work is followed with a period of silence.

The radiator on the wall opposite me was on full. There was the sound of movement, people walking on wooden floorboards. The conversations between the two invigilators in the reception/hallway echoed through the space, penetrating the back rooms. I heard the telephone ring.

My unconscious state seemed to unify the work and the working mechanisms of the gallery (its social interactions and functions), aspects usually at odds with one another. Through an apparent disengagement with the work i.e. falling asleep, the outcome was a unique synthesis based on an unknowledgeable participation with the work and gallery. If falling asleep in the space is an act of engagement in itself then is it possible to ever extricate ourselves from a work? Or are we always inherently active because we can see, think, respond and dream?