Death Through a Lens,

A review of the film Decasia
by Sophie Risner

Screened as part of The Time Machine series at the British Film Institute, Southbank, Decasia is a contemporary noir masterpiece spinning on the axis of history through film. Celebrated director, Bill Morrison and musician Michael Gordon worked together to forge a visual testimony to the death of the image and the trial of artistic expression. Running for just over an hour, Morrison, who’s production company Hypnotic Pictures entangles our mind within the landscape of sublime decay - throwing out the rule book obsessed with tinsel town colour, here Morrison like Alfred Hitchcock and Woody Allan before him finds black and white cinema the resting place for Decasia. It is the sublime that comes to the foreground when beginning to describe the narrative of a film that survives purely on the lack of a conventional narrative.
Interested in the dying nature of Nitrate film, Morrison took decomposing archive footage found at the George Eastman House and the Museum of Modern art, New York and choreographs an insight into how this medium struggles to survive the test of time. In one scene a couple dance happily together, a feather twists and turns from the woman’s head, whilst the tails of the mans coat swings merrily, all the while their faces; black holes of decomposition, the edges of the image rotting the reality that this moment is no more. In another, a camel walks from the left to right hand side of the screen, across hot sand dunes, faltering and repeating their tracks abnormally, looping in a sardonic dance implying that the camel actually enjoys the trek in the mid day sun. Kids accompanied by nuns in death shrouds loam, coaxing children into a building, the image distorting and correcting itself beginning to burn and ooze its own morbid decomposition. 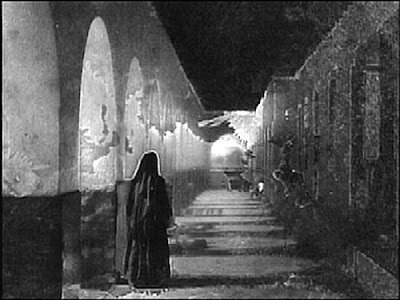 All the while Gordon’s symphony plays court to the name of Morrison’s production company, hypnotically trancing each moment with spot-on cohesion. The introduction of an electric guitar into the sound of the orchestra momentarily brings this decay up to speed. Gordon who was born in Florida and after a brief time in Nicaragua moved permanently to Miami takes inspiration from the irksome heat blazed beaches of America’s east coast. Thriving a composition through late 60’s, early 70s stoner expressionism, the sometimes almost deafening ballad that accompanies Decasia remembers the seething reality of a Nixon presidency, the burn of Vietnam and the unpacking of Cambodia, an instrumental dedication to moments best tried to forget set to imagery totalizing the reality of decay. Hard felt feelings that are all too prevalent within today’s current political climate. The fact that this comes from the bowels of the post American Hollywood nightmare, with both Morrison and Gordon rendering a clear message home, that beauty and perfection, CGI and impressive effects, are mere superficiality, the same can be accused of an art world hinging on the importance of restoration. Large scale concepts that not only survive, but build gradually with every scene. Decasia uses the method of a conventional film, with a slow and tense beginning building to a crescendo end, radically subverting it’s original conceptions, but unlike a conventional film, Decasia makes no excuses for nostalgia. Moreover, with Gordon’s impressive musical attack, this film classifies death as entertainment, objectively rendering the passing of time as an increasingly important aspect of cinematographic progression, leaving in its wake the realization that decay is all too inevitable.
Posted by MFA Curating 2007/09 at 10:08