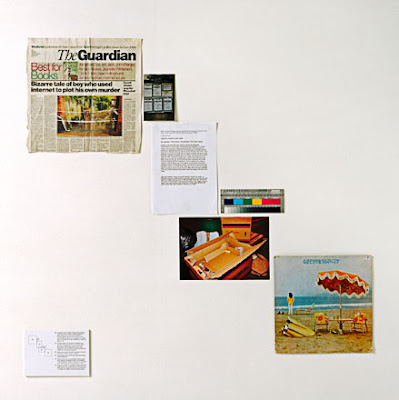 Loose Associations is the title given to a lecture series performed by the artist Ryan Gander. Accompanied by a series of slides the talk draws an intriguing line between seemingly disparate points on the cultural map. Reminiscent of a conversation among friends congregated around a table, the subject roams aimlessly, linked only by seemingly trivial facts. Gander weaves a subtle constellation between facts, semi-fictions and fictions.

The term loose associations principally refers to a derailment in schizophrenia where the phrase designates the manifestation of a thought disorder whereby the patients responses do not correspond directly to the interviewer's questions or where one paragraph, sentence, or phrase is not logically connected to those that occur before or after.

In September 2004 Gander delivered a version of his Loose Associations Lecture at Brighton University. Being typically digressive and in true anti-Sherlockian fashion, he guided the audience on a meandering journey. Beginning from point A - a discussion of desire paths in urban planning, to point B - trauma lines meant to direct traffic flow in hospitals, to point Z - a scene from Danny Boyle's 28 Days Later in which Cillian Murphy ambles a deserted London, while just off-screen, Gander points out, thousands of real-life drivers are irately honking their car horns. Along the way connections are made to everything from invented languages (Elvish and Klingon), the British TV show Inspector Morse, a historical fragment concerning British longbows, and a lawsuit the artist Gillian Wearing brought against Volkswagen.

Gander’s dialogic and conversational work offers us an alternative model through which to view the course of history. Allowing us the possibility to rethink a notion of the past under a new set of coordinates, his associative methodology maps divergent constellations that show us the fragility of our own dominant historical ideology. It permits for a consideration of an alternative possibility for viewing the course of history from a predominantly linear trajectory accompanied by a singular narrative towards a more associative form underpinned by the possibility of a process of cause and effect.

His development of narrative systems, often underlined by a dry sense of humor, are reliant on the gap in meaning produced within language. Gander treats this space as an opening of latent possibility, a site where storytelling writes and revises the course of history over and again. As the telling of a divergent and associative path of events unfolds accompanied by the slippage between fact and fiction, an oscillatory movement occurs, as temporarily we are able suspend our disbelief and imagine an alternative course to history.

If art has the possibility to reform dominant narratives, are we then able to forge new relations and retell an alternative history of art? It makes little difference in knowing Churchill’s famous quote that ‘history is always written by the victory’s’, as history is always rewritten by Ryan Gander.
Posted by MFA Curating 2007/09 at 11:34